Just 90 minutes from Adelaide, come visit one of the planet’s best places to stargaze

The Southern Hemisphere only has two Dark Sky Reserves – and one is closer than you think, with its entry point less than 90 minutes from Adelaide.

But what on earth is a Dark Sky Reserve we hear you ask?

Well, it’s one of the best places on the planet to see the stars, due to how dark it is at night time. And its international status means it’s protected from artificial light, so nothing can interrupt your evening view.

To put it into perspective, darkness is measured on a scale of 0-22 (22 being the darkest), and the River Murray International Dark Sky Reserve (RMIDSR) regularly measures an average of 21.97! About 200-300 stars can typically be seen in Southern Hemisphere urban areas, whereas an estimated 5000 can be seen from the reserve, including a better view of the centre of the galaxy (the Milky Way).

In fact, a global defence tech company has even set up the multi-million dollar ’Oculus Observatory’ within the reserve – delivering the world’s widest field of view of objects in orbit. While the observatory is not yet available for public to visit, it proves that this spot is the ultimate for avid stargazers.

So, grab your binoculars and head-lamps, pack your camera, thermos and PJs, and come explore our world-leading night skies. 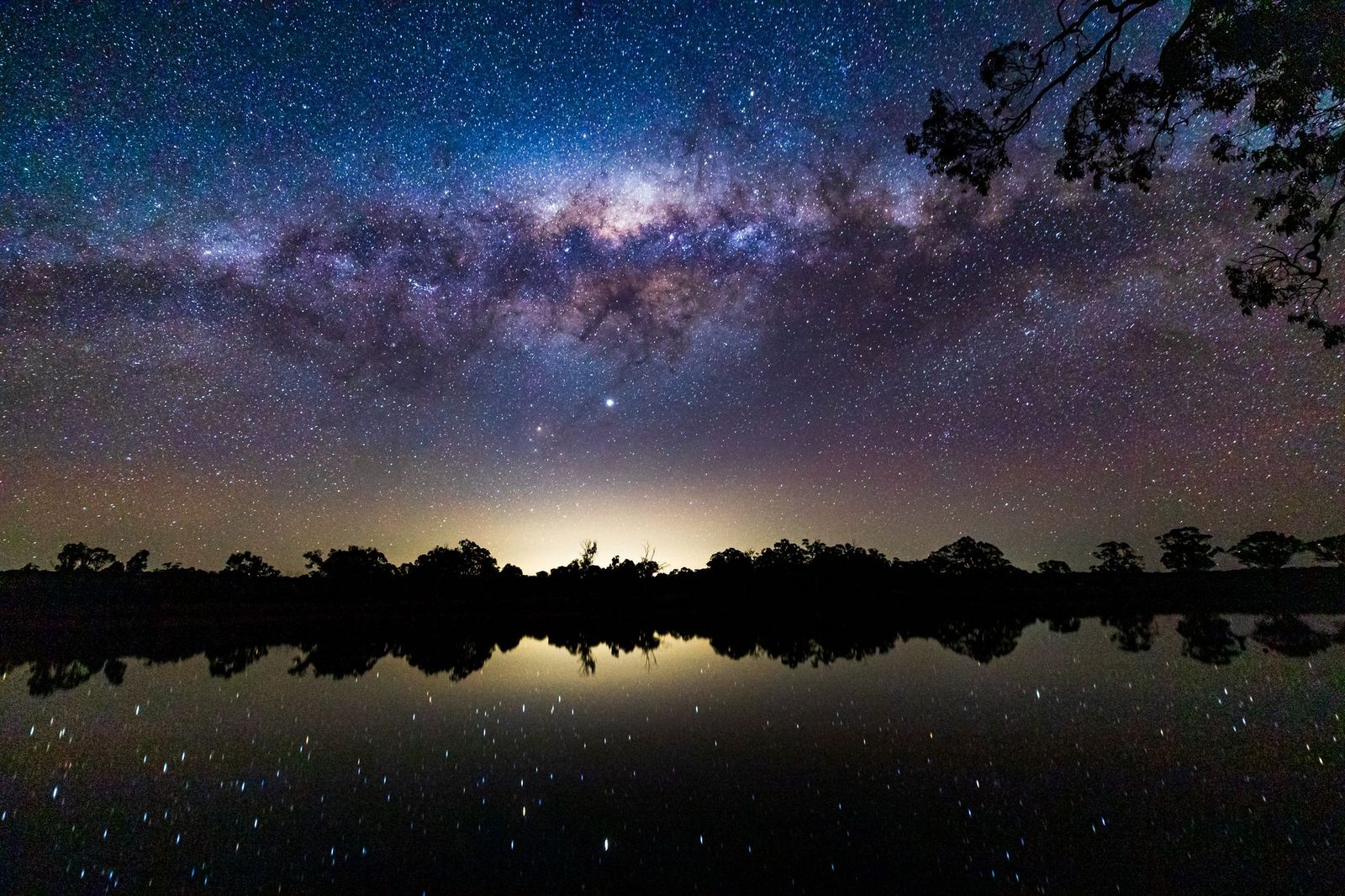 For people living in and near the River Murray International Dark Sky Reserve (RMIDSR) – looking up at night to a sky full of bright stars, the Milky Way, space stations passing by or other astronomical moments – is a normal occurrence. This area, encompassing the townships of Palmer, Swan Reach, Blanchetown, Bowhill, Nildottie, Big Bend, Sedan, Cambrai, Caurnamont, Punyelroo, Purnong and Tungkillo has been formally recognised by the International Dark-Sky Association (IDA) as one of the top 3 (and arguably the best) places in Australia to view the night sky in all its glory.

And while there are three different places recognised by the IDA in Australia, the River Murray is the only Dark Sky Reserve that is (as outlined by the IDA): “a dark core zone surrounded by a populated periphery where policy controls are enacted to protect the darkness of the core”.

So if you’re someone who loves nature, travel, adventure, seeing sights, taking in ‘first’ looks or exploring new things, then our dark skies are definitely for you. Not to mention – those budding astronomers and astrophotographers who are already regular visitors to the reserve (as you can see from the photos below). 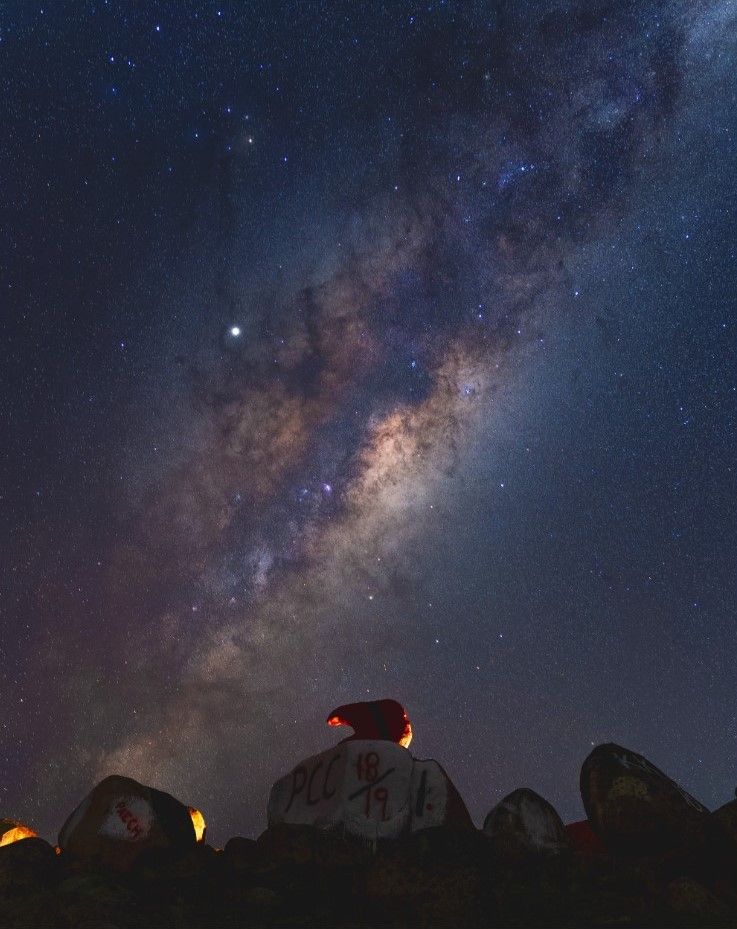 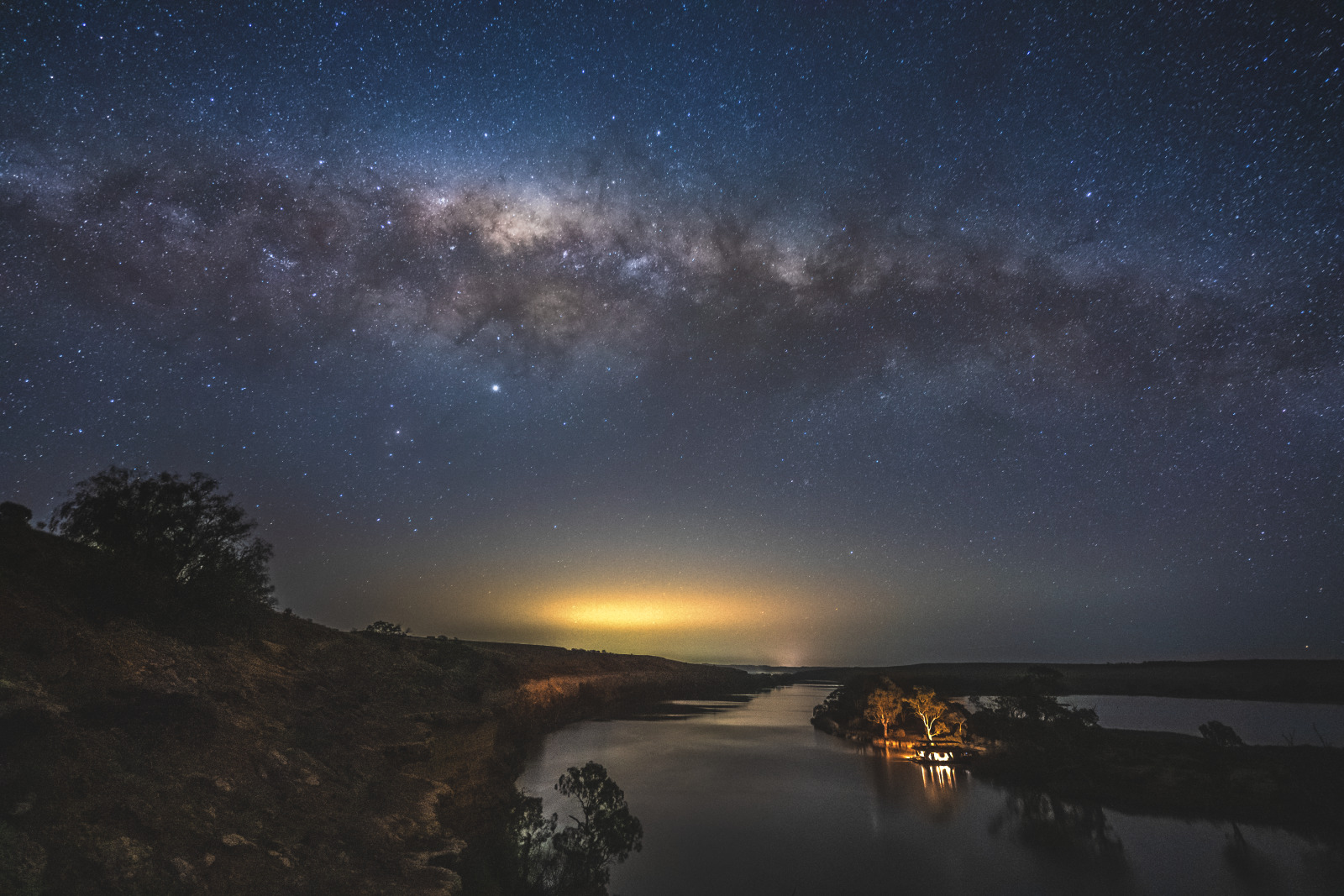 In fact, the RMIDSR was even named by Qantas as one of the top 20 things to do in South Australia!

But, understanding that a trip into the outback might not be independently manageable for everyone, local tourism operators have jumped on board to offer a range of awesome ways to experience the River Murray International Dark Sky at its best – and here’s just a few: 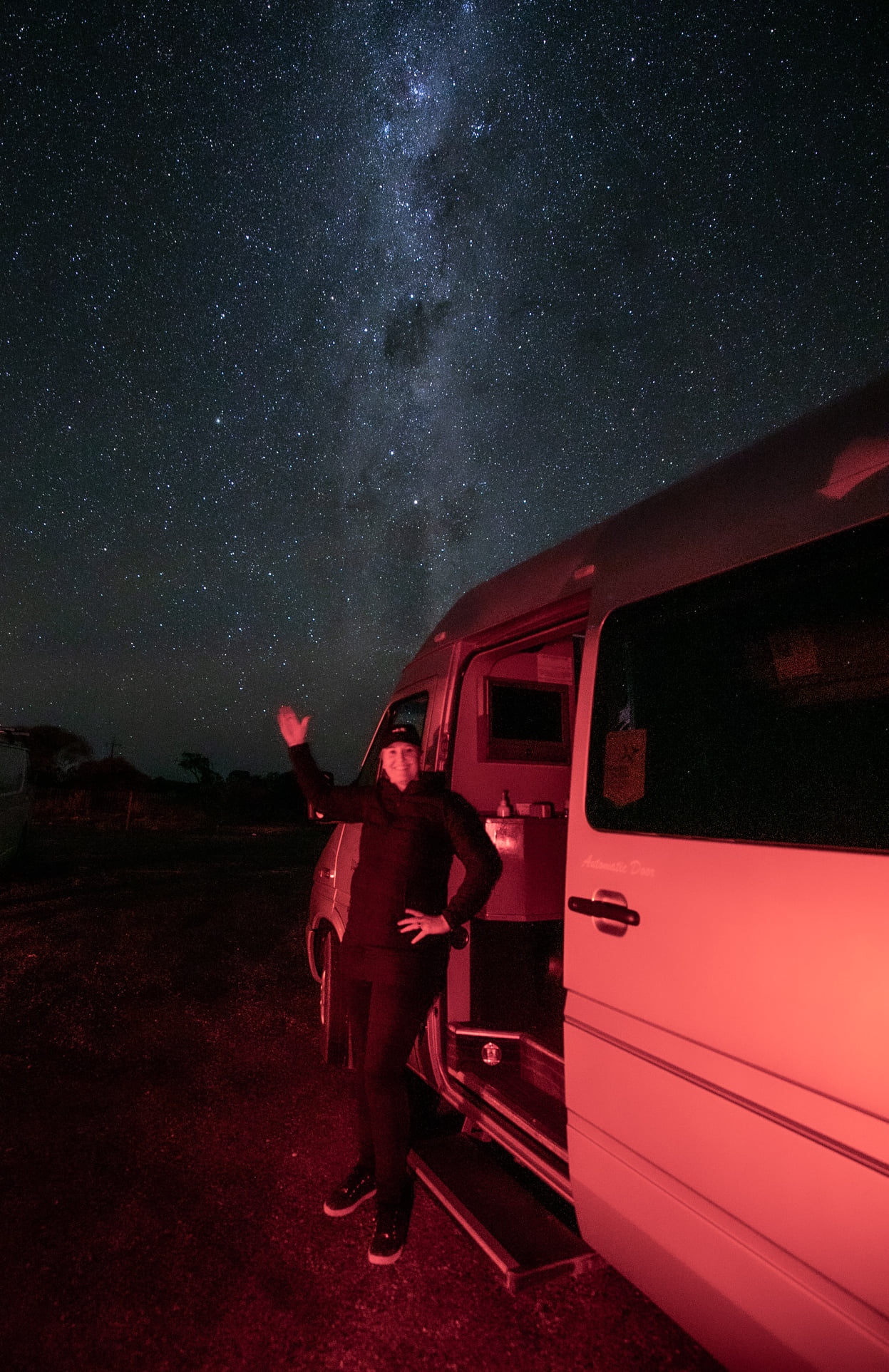 On the Juggle House Experiences Dark Sky Gold Stars Sunset Dinner, one of the local tourism legends Kelly (pictured, above) will give you a premium dark sky experienceyou never knew existed.

Juggle House has teamed up with experts in astronomy, astrophotography and local tourism to take you on a journey into the remarkable dark sky environment. The tour and dinner is a stargazer’s delight – and will take you to incredible places, like perched on top the tallest Murray River clifftops in Australia, to Ngaut Ngaut Conservation Park where you’ll be treated to a tour from the Aboriginal Custodians, and dinner will be atop the mighty Murray River at either the Bowhill General Store or the Swan Reach Hotel (both boasting magnificent views over the water).

**Use of provided telescope and red torch lights to view stars, constellations, planets, clusters and galaxies;

**Useful guided tips to help you connect to the night sky through stargazing;

**Astrophotography (bring your own digital camera and tripod for techniques to capture awe-inspiring starry night skies);

**Insightful and light-hearted commentary on your journey, about townships and locations between destinations; and

**Fully enclosed trailer for transporting equipment and luggage upon request.

These guys have even created their own moon calendar to help you decide when to come!

TWO: Cruising in style under the stars 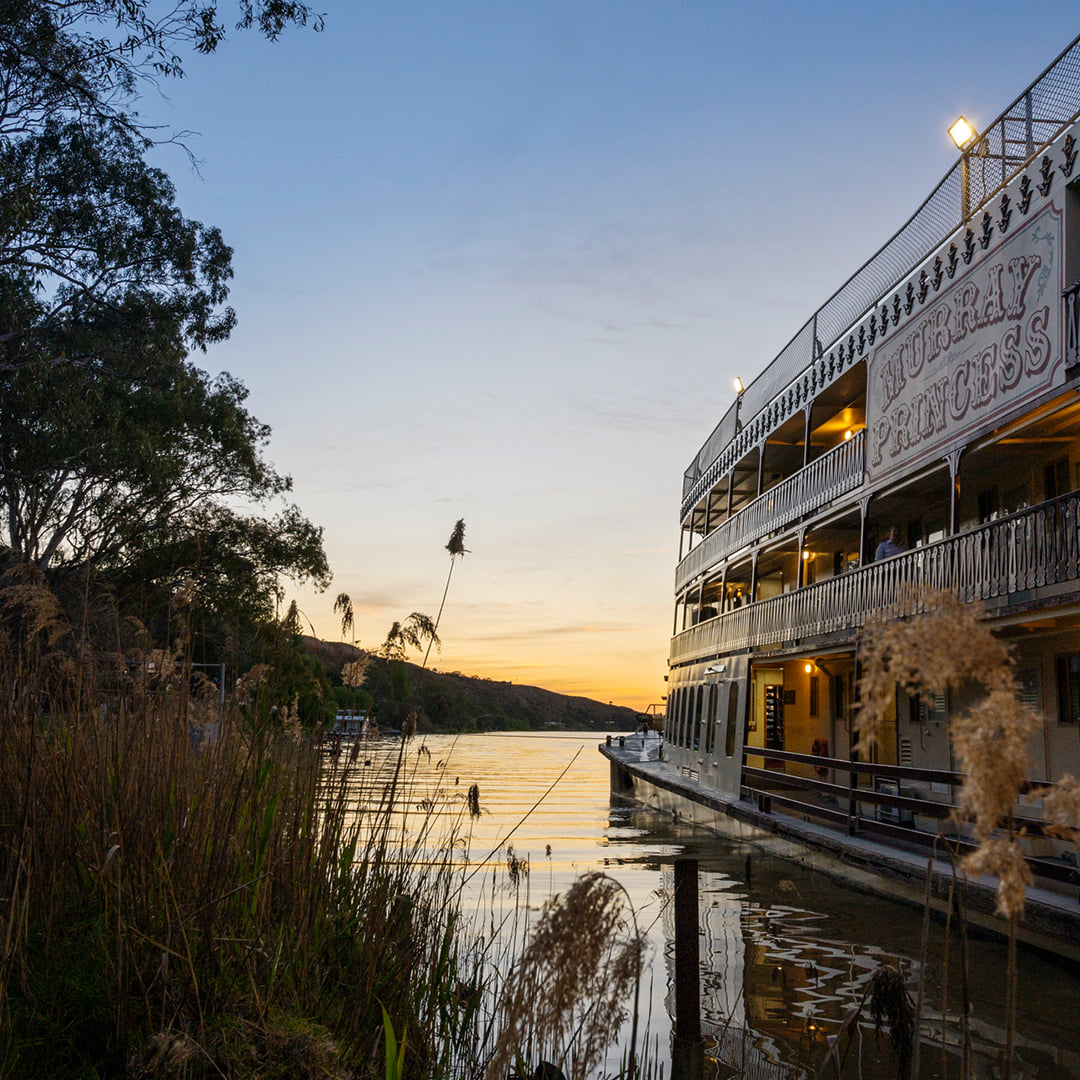 One of the things that makes our Dark Sky Reserve totally unique to others in the world is where it sits along the Murray River system. What this means for visitors, is that you can take in two of Australia’s most iconic environments at once – the Murray River, and the stars above it. Imagine floating along and watching the world go by during the day,then simply ascending to the top deck of your vessel for a view to twinkling stars and sights at night.

You can have all this, in luxury, on board the PS Murray Princess Adelaide to Murray River cruises.

Like the dark sky reserve, the gorgeous Princess is one of the region’s prized possessions. She travels through some of the most beautiful parts of the reserve, meaningyou can gaze into the night skies from every spot onboard – including your bedroom window!?

So if the river and the skies are up your alley, this might be the best way in Australia to experience them both at once!

Check out all the cruises, and all the luxury inclusions here

If you love to camp, then why not stay at one of the local caravan parks. Or for something really different, try the large Meldanda Campsite near Cambrai.

This little-known facility is perfect for outdoors-loving families, and includes everything from a recreation hut, various shelters, beach volleyball, frisbee golf, walking trails, community bushgardens, butterfly garden, bushtucker garden, spiny daisy nursery, frog pond, and a bird hide. And of course – as it sits right in the middle of the River Murray Dark Sky International Reserve – it has a Dark Sky Observation Paddock!

If you  decide to stay here, make sure you drop in and check out some other cool local icons – including Shell Hill and the Palmer Rocks.

Another camping spot in the core of the reserve is the Swan Reach Conservation Park – however, keep in mind there are limited facilities, so you’ll need to be an experienced camper to set up here.

Otherwise, check out our region’s other caravan parks and campgrounds here.

FOUR: A few nights of luxury in the core 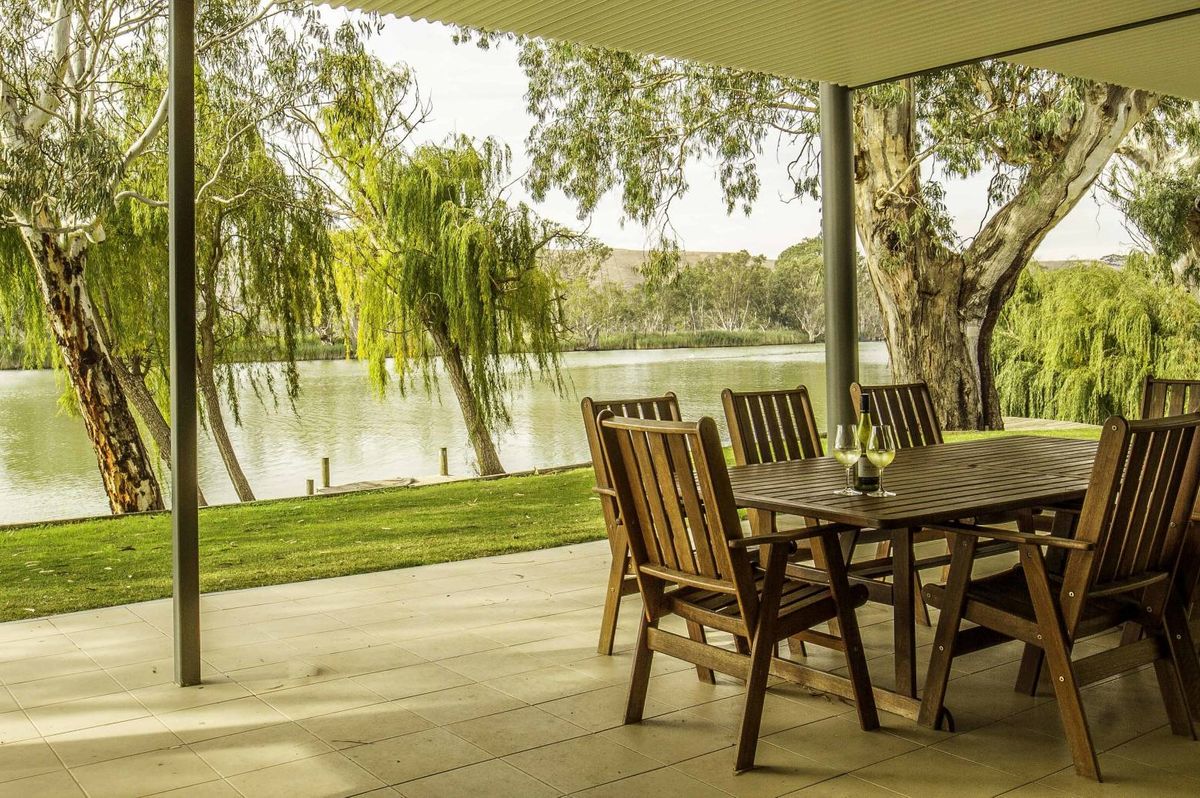 If you’re still not ready to get out amongst the crowds, why not plan your own dark sky escape to a riverfront holiday house.

River Shack Rentals have made it super-easy to find them as well, with a list of those houses located in the Dark Sky Reserve district. Check them out here.

These guys have everything from premium homes that sleep up to 24 people (just like the one pictured above in Caurnamont) – all the way through to cute little outback shacks for two. Browse their website to plan your private, starry, escape.

(*Another option for small groups on a limited budget is also the Mannum Motel, which is at the entry point to the reserve, and overlooks the dual ferries in Mannum.)

FIVE: Making your own way in a houseboat

Another way to keep to yourselves, while enjoying the best of the reserve, is to float through it on your own houseboat.

The best place to start your search for one is on the Houseboat Hirers Association website, where you can browse by number of beds, departure locations and dates for your trip.

Remember when you’re packing to pop in your binoculars and camera long lenses so you can make the most of being under the stars!

Some of our favourite places to moor for the night are along the reserves and landings near Swan Reach, Bowhill, Nildottie, Big Bend and Walker Flat.

(Also – if you’re bringing your own fruit and veggies into the region, remember to check the PIRSA Fruit Fly website for up to date information on your travel obligations.) 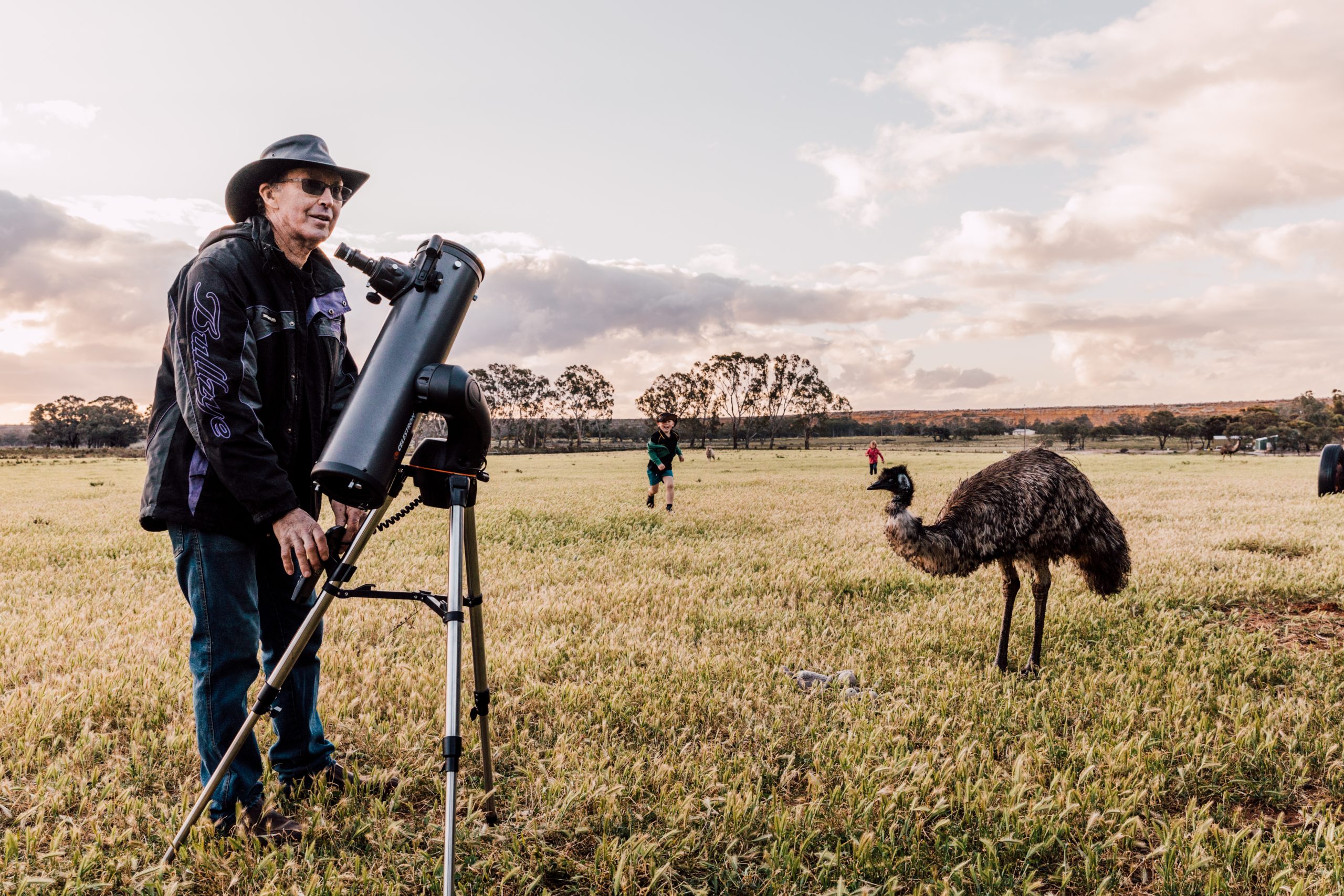 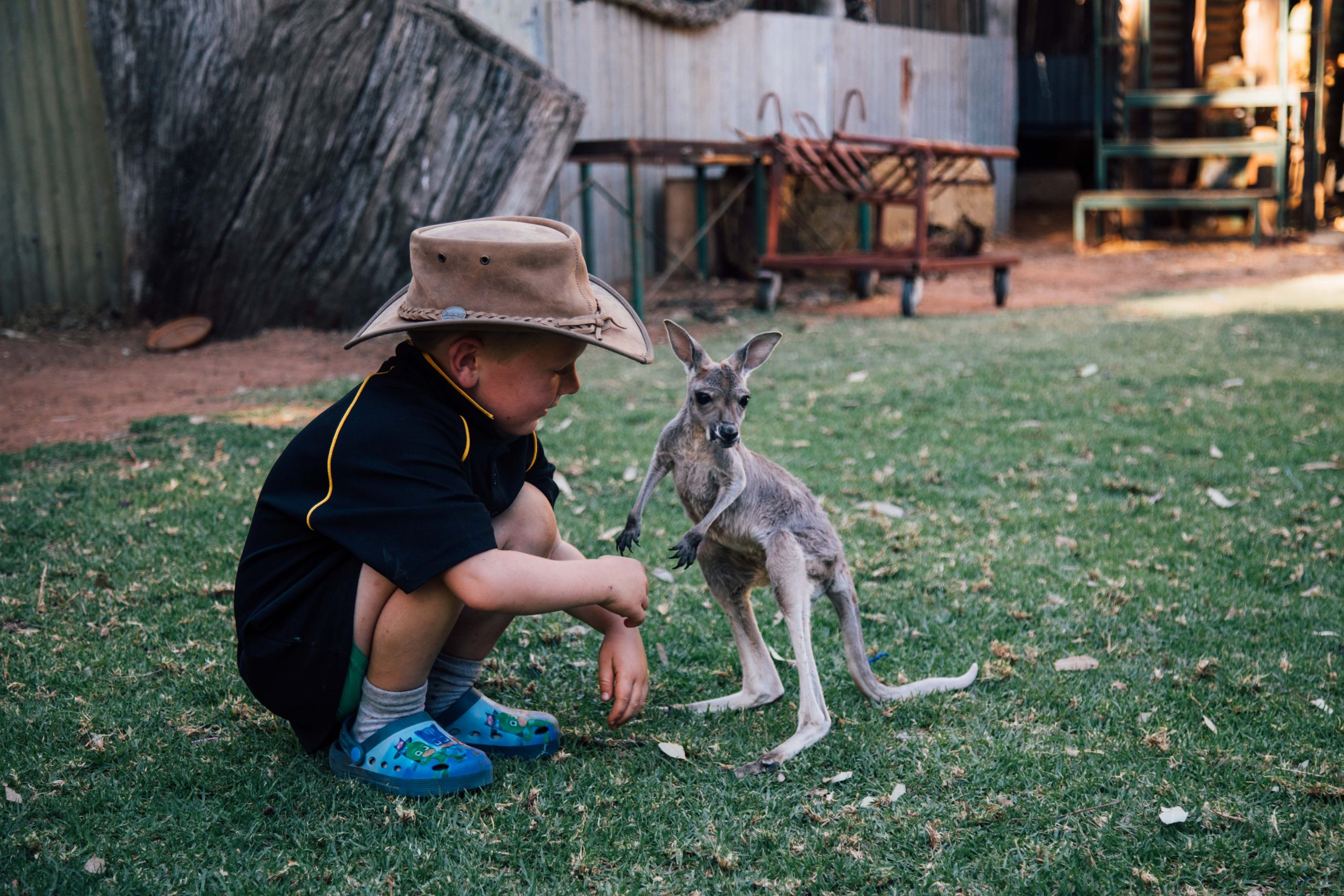 If you’re keen to get back to the outback with your stargazing tour, then Big Bend By Night is your ideal tour! The best part is, this is one the closest spots you can get to the core of the dark sky reserve.

This family-run farm-based business will take you on a nocturnal tour where you not only use their telescopes to check out the skies, but also spot some late night wildlife too (think wombats, an albino kangaroo, wallabies, owls, possums and more).

They’ll also take youto the site via their rustic open top carts, and it’s always an adventure with the team cruising you around the countryside in the dark.

Check out more about Big Bend By Night here. 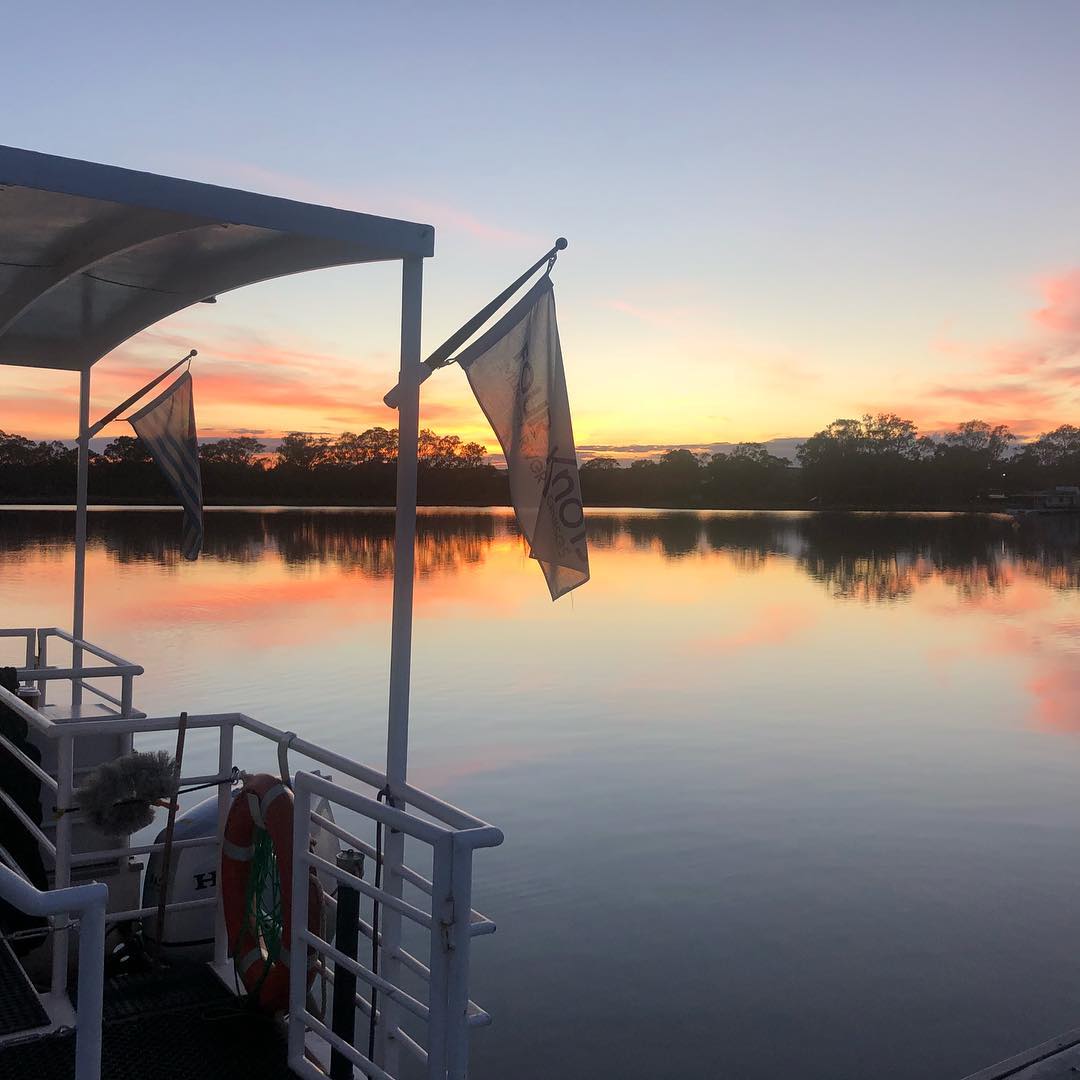 If you’re after something short and sweet, with a team of Murray River experts looking after you, then a sunset cruise with the Four Knots crew from Mannum would be perfect. While you’re not technically in the reserve you’re right on the edge, so you can still get a brilliant view up to the night skies while you take in the beautiful scenery of the river cliffs changing colours as the sun goes down.

Read more about it, and book your cruise here.

For those of you who want to make your own path, check out the fact sheets, maps, images, videos and more on the River Murray International Dark Sky Reserve here. Plus, remember to keep an eye out for the new viewing platforms and signage which has just been installed around the reserve area – these are the perfect spots to set up your camera or telescope for some magic starry moments. 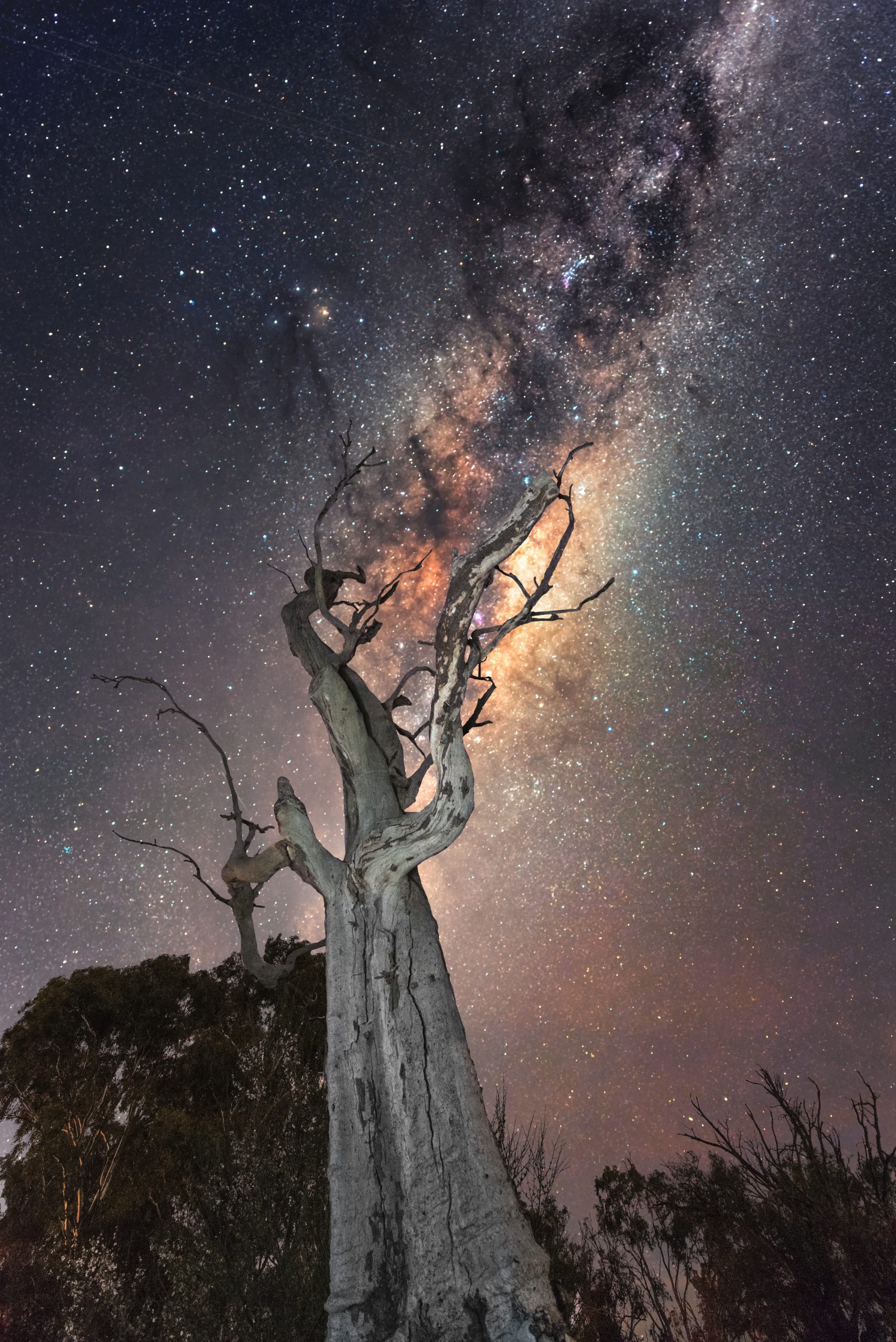 Above: Photo courtesy of @blntpencil.