Morgan Coull is one of the State’s best ultra-marathon runners, and now he’s challenging you to come and test out our growing network of running and bike trails. 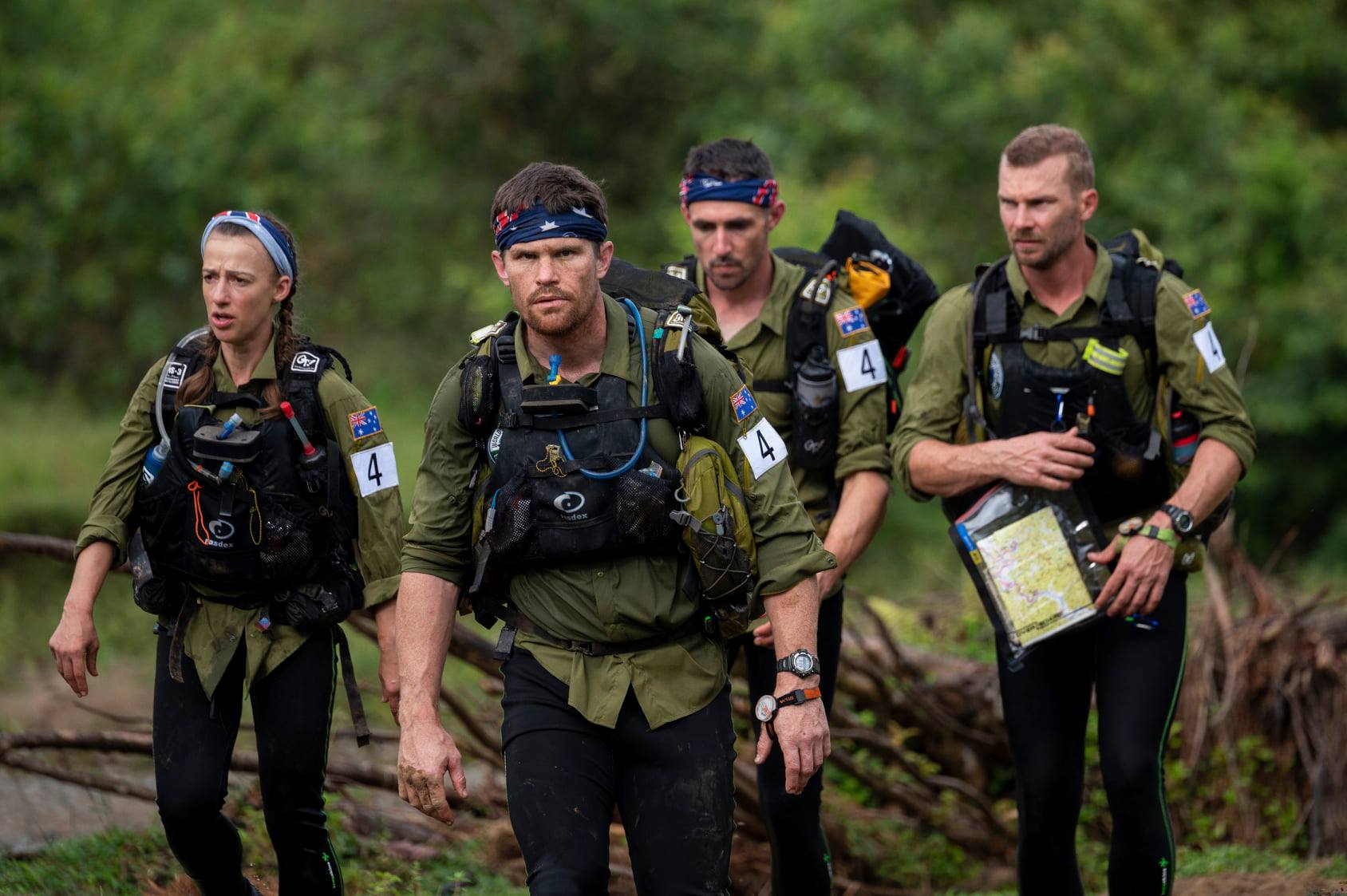 Above: Morgan (back, centre) with his team during the Fiji Eco-Challenge. Pic via @toughraceTV Amazon Prime.

Now he’s bringing extreme events to the Murray River, Lakes and Coorong – and it’s fast becoming the destination of choice for serious mountain bikers and distance runners and recreational runners and riders alike.

As one member of the team behind Murraylands Multisport Inc (or MMI), Morgan has helped build an impressive calendar of events for fitness fans of all abilities in the region.

The latest – the Murray Bridge Marathon Festival – is set to bring a crowd of seasoned and new runners to Murray Bridge on the weekend of 31 October to 1 November 2020.

It’s a unique racing festival that places as much importance on ensuring runners enjoy the magnificent riverside experience, as it does on designing the course.

The roar of the town’s iconic Bunyip gives the starting line send-off for runners and walkers (there are a mix of categories – from a 3km and 5km walk/fun run through to 10km, half marathon and full marathon runs). 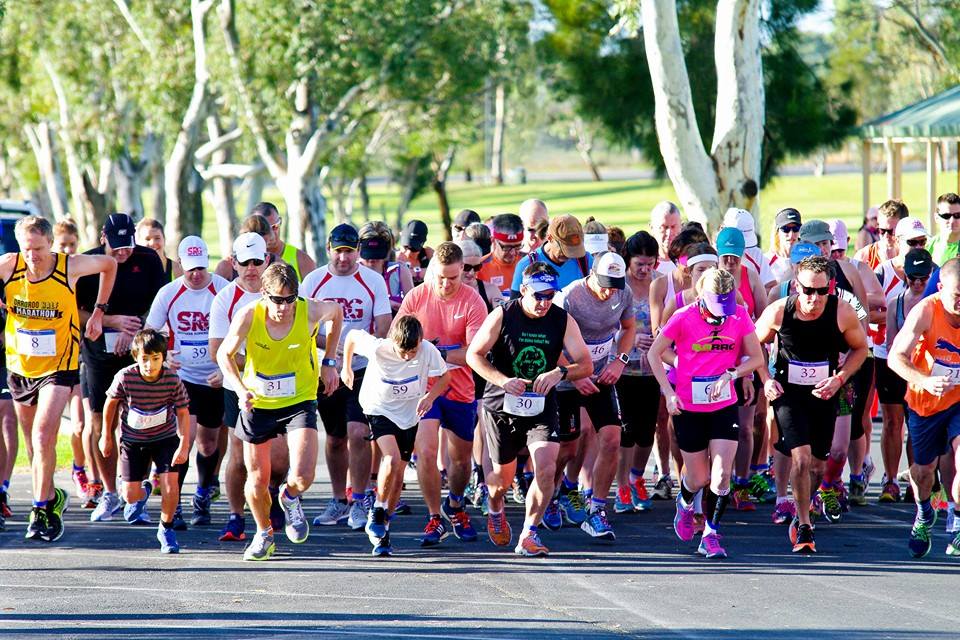 Above: Runners taking off at the starting line at Sturt Reserve.

“Runners absolutely love being able to run across the bridge and run as close to the river as possible as it winds its way along the levee banks and around the wetlands loops,” Morgan says. 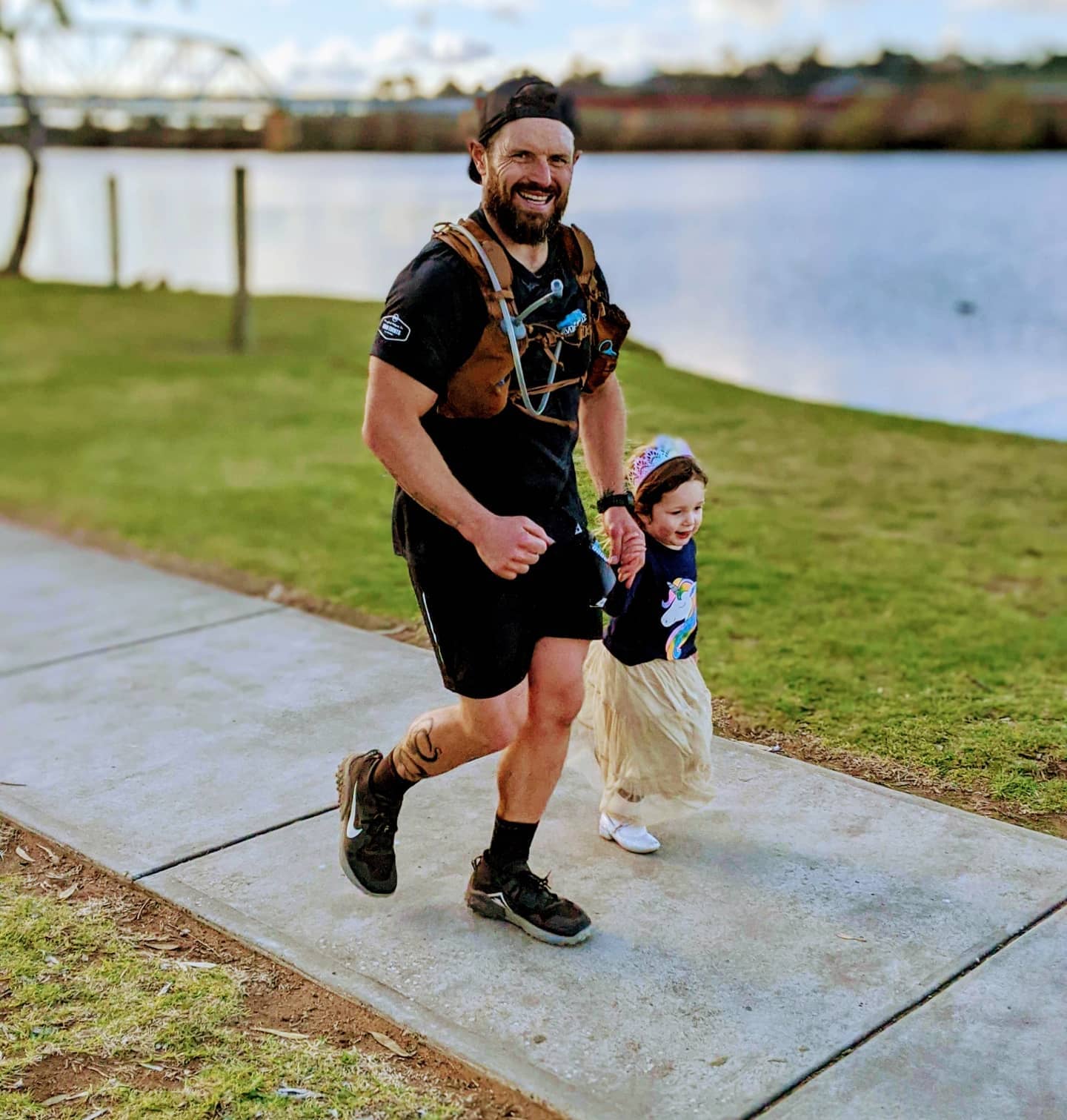 The course is designed to maximise fun – there’s even a children’s choir along the route to entertain competitors, a scenic stretch along the river and past dairy farms, a loop through the popular Rocky Gully Wetlands and of course, through the historic Roundhouse gardens. You never know what other wildlife you might see along the journey too. 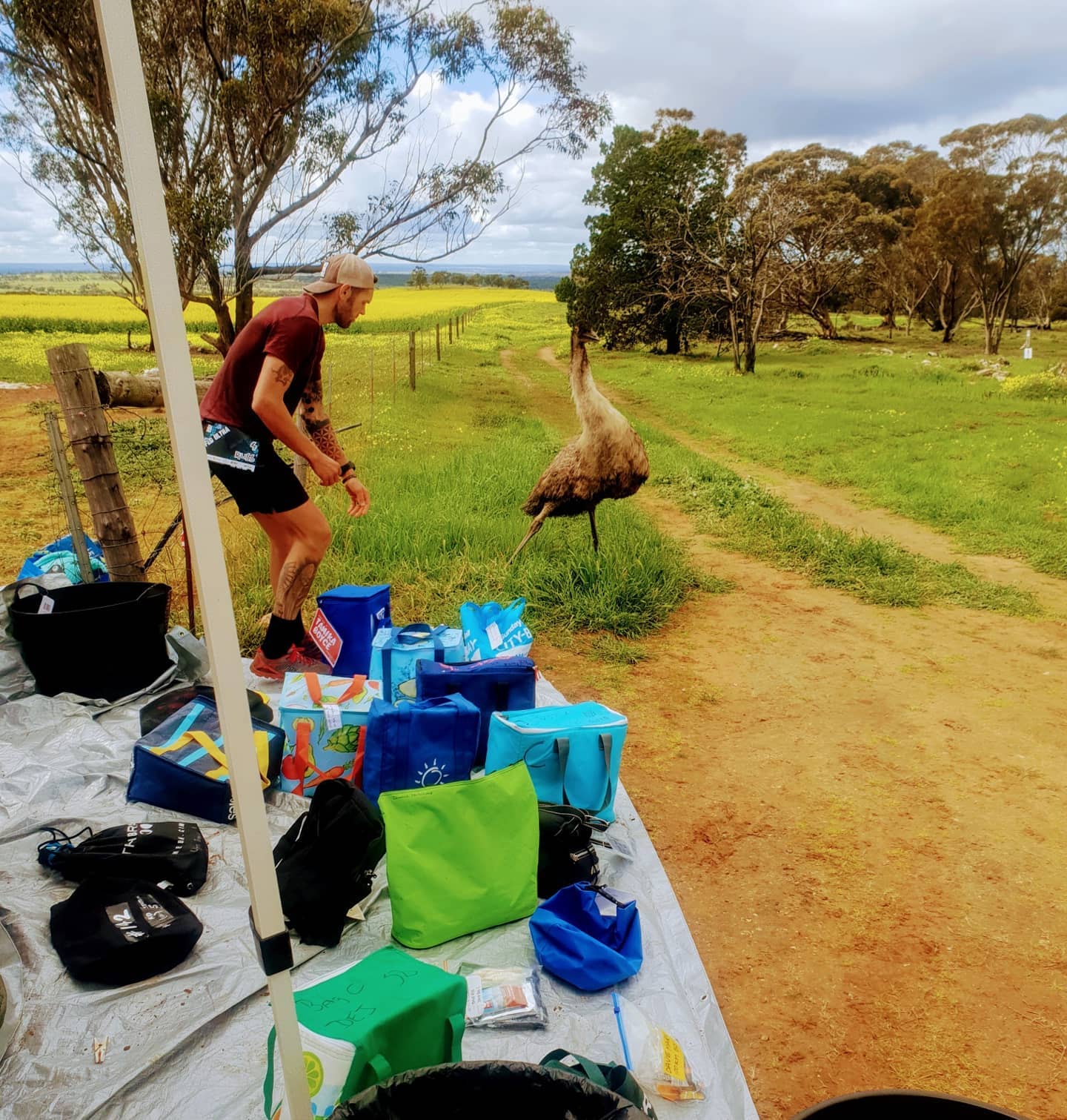 Above: Just one of the many local residents you’re likely to see while running along our backyard. Image: Aaron Hancock.

With just over a month until race day, Morgan is encouraging runners to get training now.

So where does a pro runner choose to train? For Morgan, it’s all about the trails across the local region.

“It’s the variety of terrain and vegetation that we have on offer that makes running in this region so great. If you want to run by the river you have a great network of wetlands, river trails, levee banks and reserves to choose from,” he says. 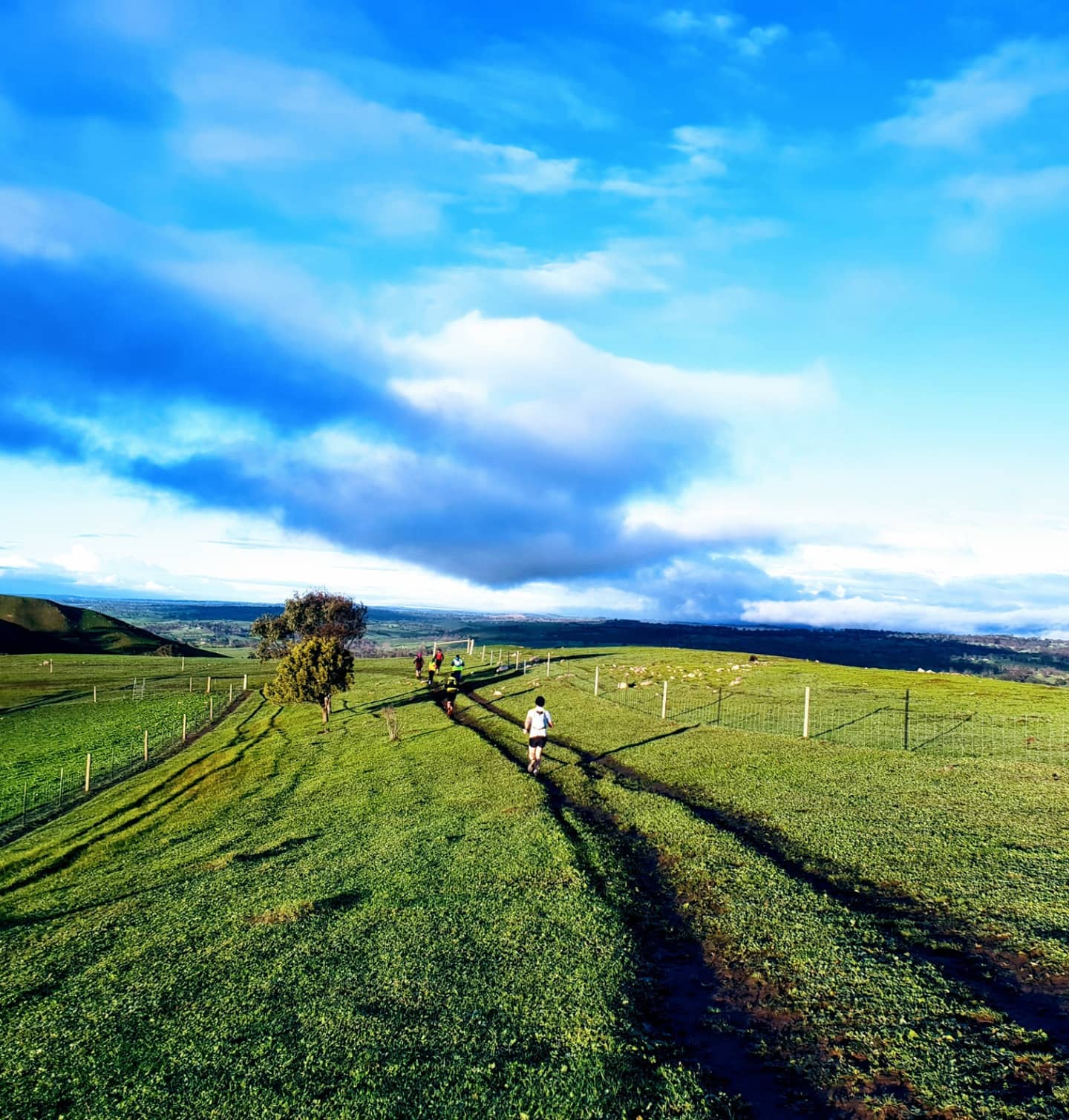 Above: Whichever terrain you enjoy running on best, you’ll have a wide variety of options here. Image: Aaron Hancock.

“If you want single track trails we have the best all weather tracks in SA out at Monarto Woodlands, Frahn’s Farms Conservation Area and Kinchina Conservation Park trail networks including the new MMI grant-supported Cypress Hill Trail.”

MMI is becoming increasingly well known – and respected – for its ultra events too. Runners from across SA competed in the Federation Ultra Trail in August, with races up to 100km long. While the gravel-grinding cycling challenge Rockleigh 105 Gravel Fest drew its largest ever number of competitors in September – an amazing turnout given COVID restrictions. See one of the competitor vlogs here for a close-up visual and commentary of their experience.

The key to the region’s success in hosting major endurance events is its unique combination a of stable climate and environment, Morgan says.

“Nowhere else in Australia gives you the best conditions all year to utilise our natural assets. When it’s hot we’ve got the river, when it’s too wet in Adelaide our trail network holds up the best in wet conditions and drains impeccably well compared to the Adelaide Hills,” Morgan says.

“Our variety of terrain is also enviable with the ability to combine flat and scenic wetlands and levee bank trails by the river with single track joy out at Kinchina Conservation Park via the Lavender Federation Trail. Out at Kinchina it really feels like the little Flinders Ranges with its unique rock formations and vegetation similar to what you find out at Wilpena and Melrose.”

Above: A glimpse of the rocky terrain within the Kinchina Conservation Park. Image: Sputnik.

This athlete knows a thing or two about running as well.

A gifted sprinter from an early age, he won the Stawell Gift in 1998 for the 400m distance, and came agonisingly close to a consecutive win in 1999 – being awarded second place in a photo finish. Chosen to train with Olympic relay coach Manfred Lewandowski, he was working hard in a bid to earn a spot on the 2000 Sydney Olympics 4x400m relay team when tragedy struck. Morgan suffered a subarachnoid brain haemorrhage that landed him in intensive care for a month and put an end to his sprinting dreams.

The silver lining was that it led him to discover a passion for endurance events.

That culminated into the ultimate dream this year – completing the World’s Toughest Race: Eco-Challenge Fiji. Also known as 11 days of extreme racing with almost no sleep over mountains, through impenetrable jungle and over rivers. 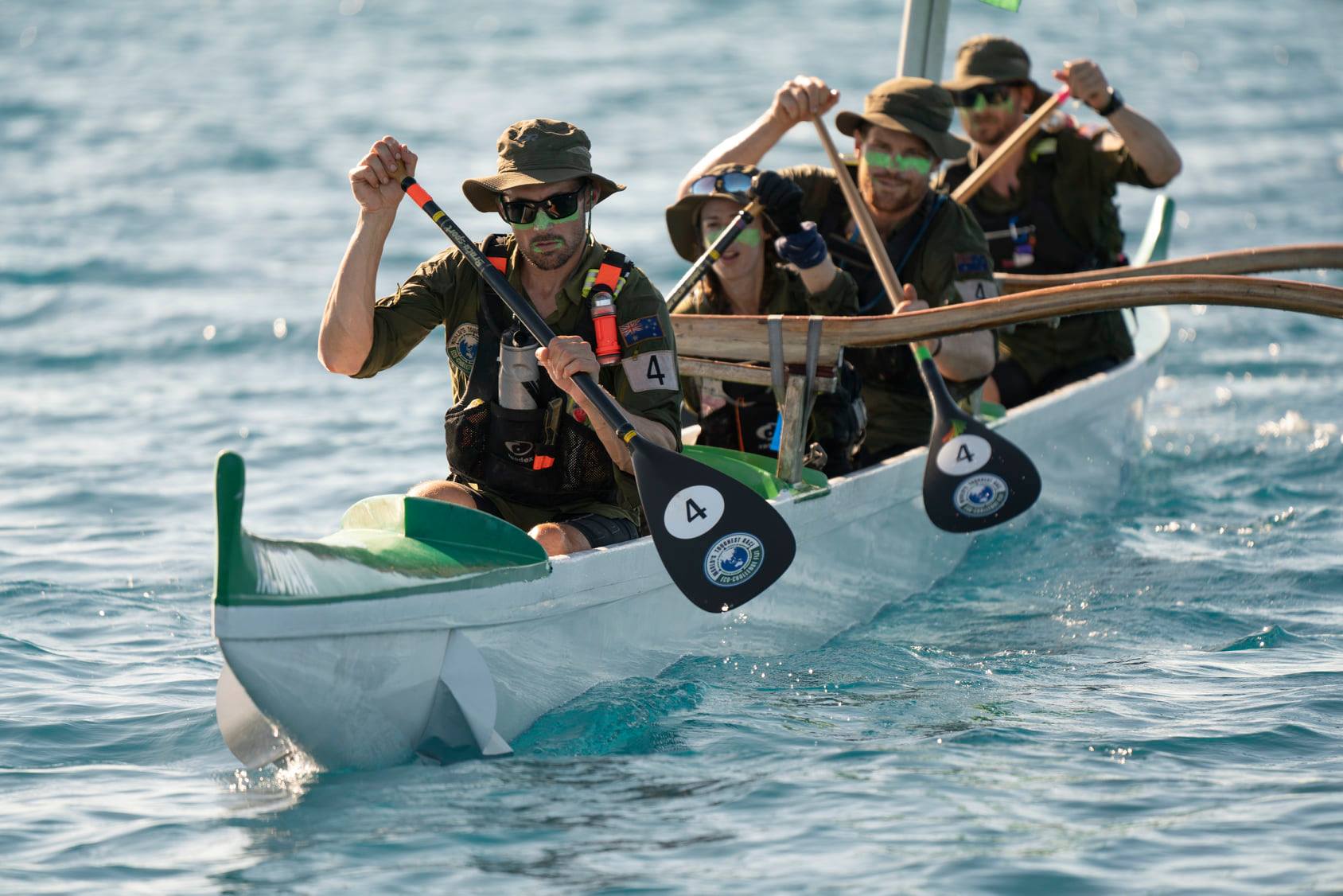 Above: Morgan pictured (front) during the Fiji Eco-Challenge. Pic via @toughraceTV Amazon Prime.

“Sleeping on average 1.5 hours a day for an 11-day adventure race can really takes its toll – it has a massive effect on decision making, safety, temperature regulation and performance,” Morgan says.

“Undertaking the 8km river swim after climbing the Vuwa Falls really tested my limits. Some smart decision making by the team saw us leave the river and bash our way through an impenetrable jungle for hours at a time to warm up when hypothermia started to take a grip.” 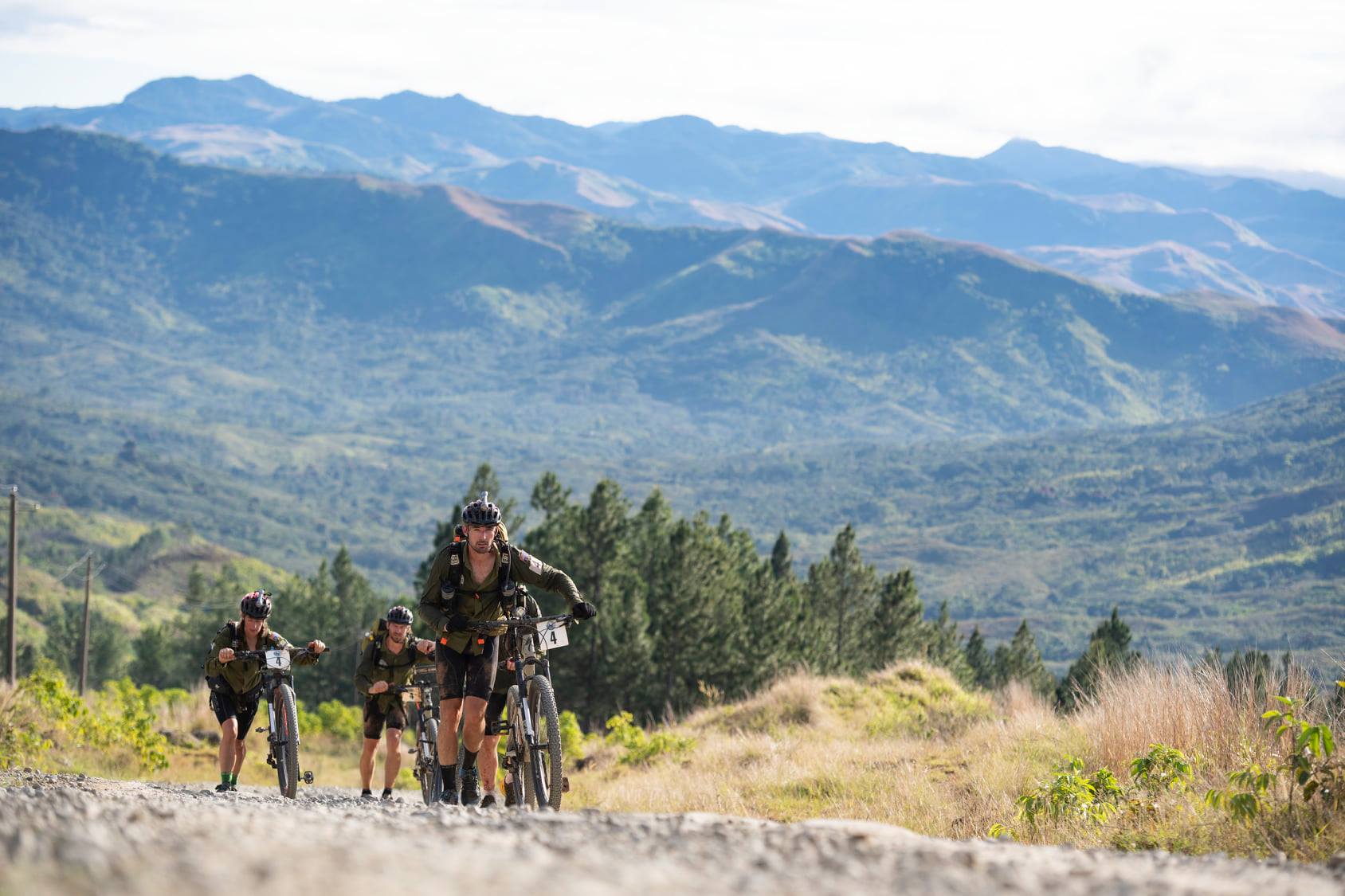 Above: Morgan pictured (front) during the Fiji Eco-Challenge. Pic via @toughraceTV Amazon Prime.

Now back home, Morgan is enjoying a quieter pace of life – at least until the Murray Bridge Marathon Festival.

“Exploring and rock hopping/climbing up the Mannum Waterfalls, dog walking around the Riverglades Wetlands Loop, riding and running all the local trail networks are amongst our fave family activities in the region,” he says.

Top on his list of must-do challenges for visiting cyclists and runners is mountain biking at Kinchina on the Cypress Hill Trail – then following the Callington Spur Trail through Monarto Woodlands, gravel riding from Monarto Sports Complex to Rockleigh and Mt Beevor and road riding along the river via Mypolonga, Wooodlane, Caloote and Mannum to Younghusband on East Front Road.

Above: A crowd of cyclists during the Rockleigh Gravel Fest. Image: Paul Butler.

There’s also the exceptional new trail developed that runs 300km (ish), known as the Murray to Clare Cycling Trail (and following that path in SA). This trail was recently reviewed by SA cyclist and editor of @la_velocita James Raison (en route to MMI’s Gravelfest) who was blown away by the trail, describing it as “absolutely mint”! 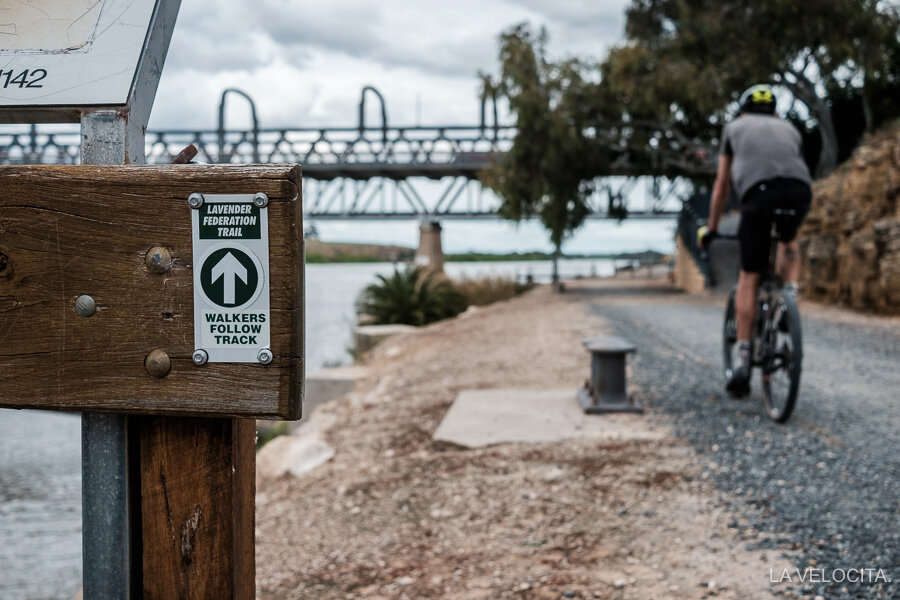 Above: Cycling into Murray Bridge underneath the Bridge offers a beautiful and uniquely South Australian sight. (Image via @la_velocita).

Runners can’t go past running over the Murray’s first bridge (with impressive views of the Murray below) before taking the levee banks from Thiele Reserve to Swanport Reserve, running the Rocky Gully Wetlands Loop, or exploring the Kinchina Conservation Park trails. 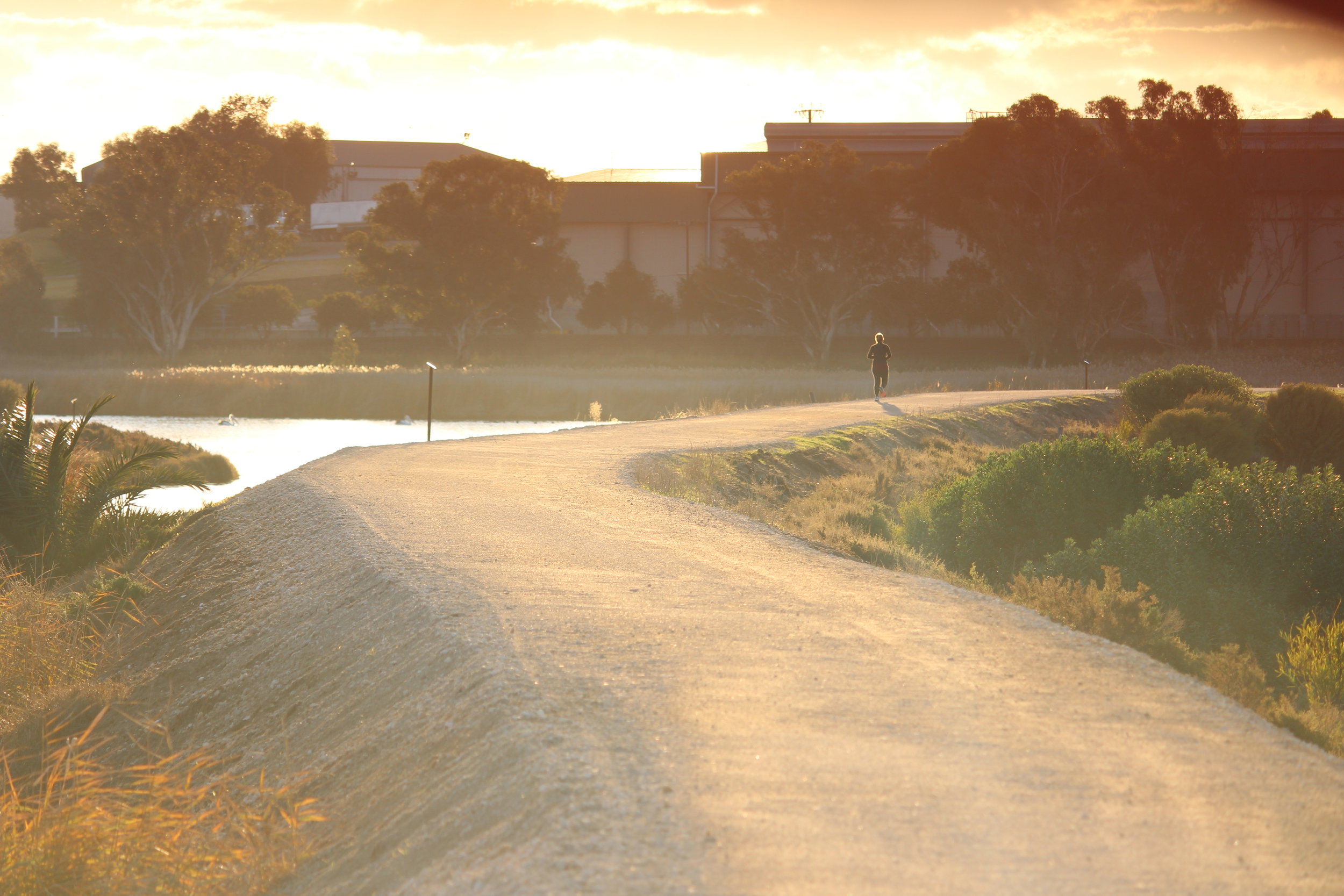 Above: Runner pictured on a stretch of levee bank. Image: Dave Atze.

After all that effort, he recommends taking time out to relax with family by the river at Sturt Reserve, taking in the sights at Monarto Safari Park or sneaking down to the Langhorne Creek Wine Region to indulge in some delicious local food and wine. 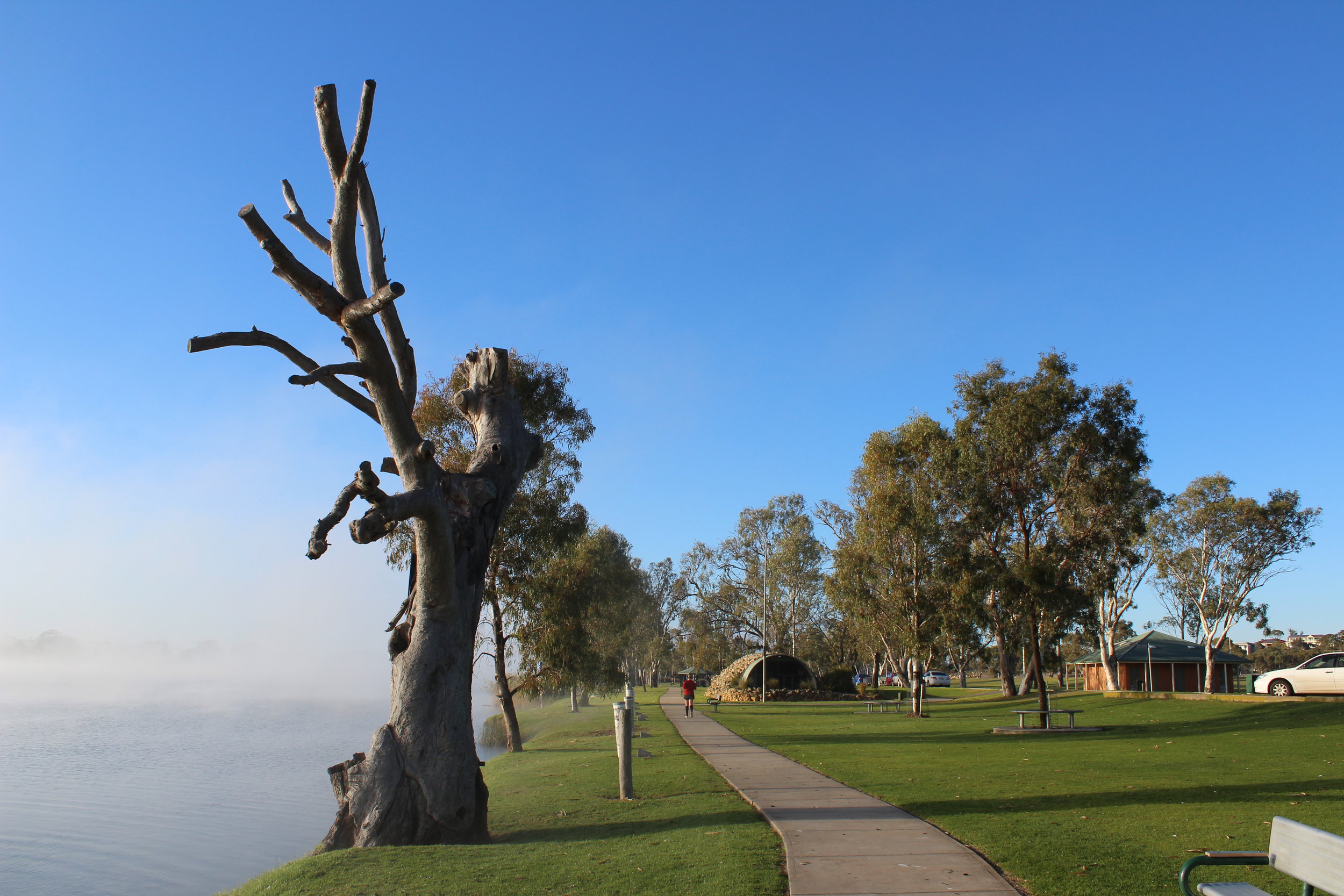 Find our more about the Murray Bridge Marathon Festival – and register to join in the fun – here.

Give the kids an unforgettable Aussie adventure
Need a wellbeing break? We’ve got the perfect place…