Amongst a cheering all-ages crowd and with their teams lining the town’s main street, the incredible world-class cyclists took off in style for a quick lap of Murray Bridge’s east side, crossing over the Murray River twice via the iconic road bridge, before they sped out of town towards Monarto Safari Park.

In a coup for the Rural City of Murray Bridge and wider Murray River, Lakes and Coorong tourism region, this is only the first part of an incredible festival of cycling for the area over the coming week.

Next Friday, 24 January, the Westpac Community Challenge riders (and their supporters) finish their journey once again along Murray Bridge’s Bridge St, just ahead of the first of the men using this same finish line for the Santos Tour Down Under Stage 4.

Murray River, Lakes and Coorong Tourism Development Manager Julie Bates said she expected the three events to bring upwards of 16,000 people to the region – many of whom may have never visited before.

“We’ve got the best of the Santos Tour Down Under this year, with a women’s start, a men’s finish and huge crowds set to line the streets to support the thousands of people completing the community challenge,” Mrs Bates says.

“Our community and local businesses are excited about not only the direct impact these visitors will have on our region’s economy, but also the long-term impact of having so many screens across the world filled with images of our beautiful Murray River landscapes.”

Rural City of Murray Bridge Mayor, Brenton Lewis started today’s proceedings by firing the starter’s gun.  “The women’s race crossing directly over the iconic road Bridge today – not once, but twice – is an added bonus, as the breathtaking views of one of our major attractions are beamed out to people across the world,” Mayor Lewis said

“Early estimates suggest an economic benefit of close to $1.2million for the region overall.”

“The energy and atmosphere is one of excitement across Murray Bridge after today’s event, and we’re excited to see it go up another level with the two events next Friday”.

To welcome the first of the world-class cycling events to town, the community has hosted a range of events for cycling enthusiasts and their supporters. Some of today’s pre-race events included a community breakfast along Sixth Street and champagne breakfast along the riverfront.

On Thursday night, avid cyclists took part in a twilight cycling event – the Sturt 100. This involved riding 100km on a circuit looping around Murray Bridge’s premier waterfront reserve – Sturt Reserve – kicking off alongside the iconic Bunyip!

The other event in the series – the River Raid – will be held this Sunday, 19 January from 7am. During this event, people can choose to cycle distances of 44, 82 or 115km along quiet country roads and in close proximity to the edge of the Murray River. 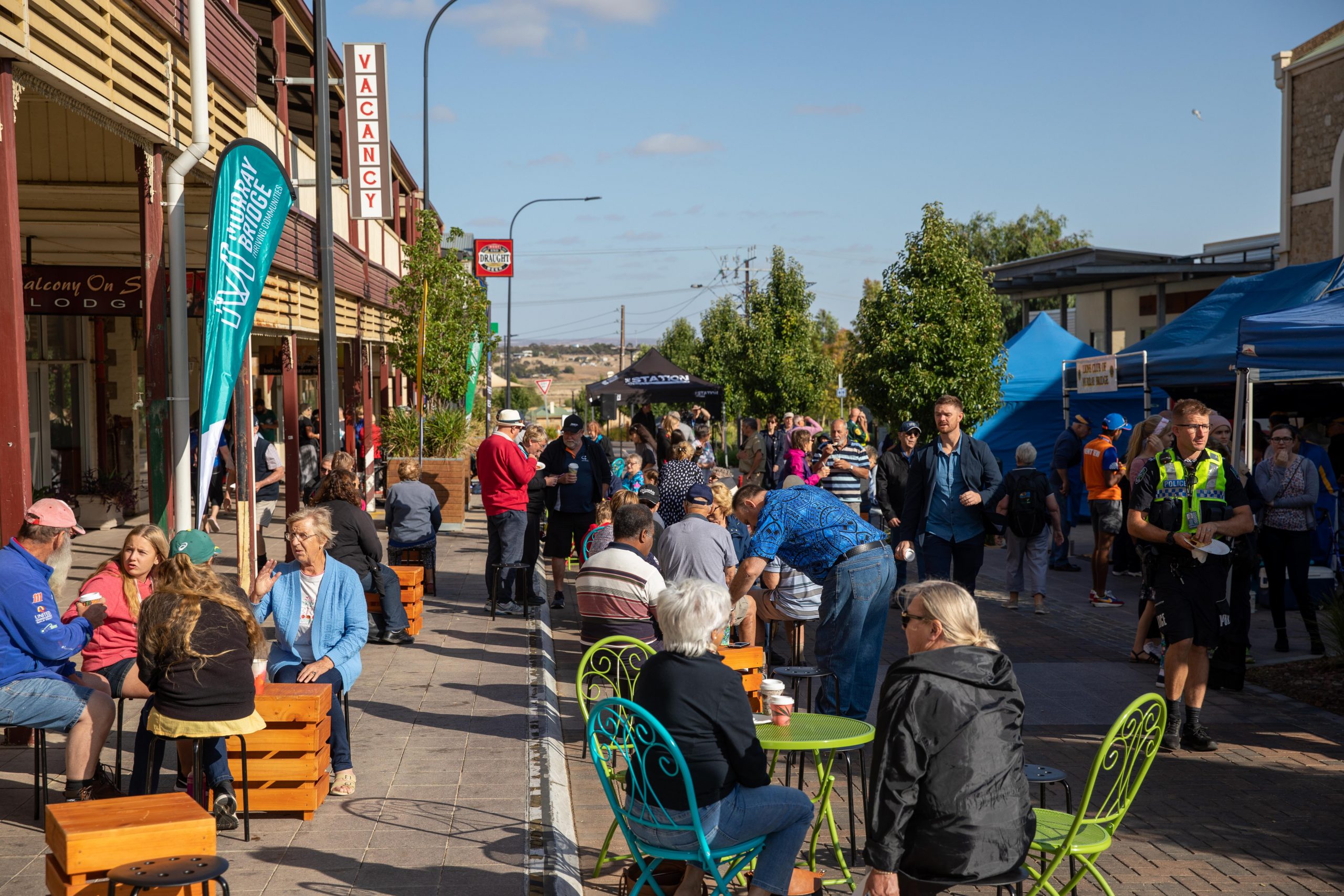 “Thanks to the efforts of local volunteers, partner organisations and our exceptional Murray River backdrop, we have some of the best places and views for people to cycle, run, walk and paddle,” Mr Sedgman said.

“We’ve got more tracks, trails and cyclists in Murray Bridge than ever before and we are fast becoming a regional hub for outdoor recreation.”

“But it’s not just the serious athletes who can get involved, we also have events for all ages and abilities, including this summer’s Murray River Splash Festival down at Sturt Reserve. This event includes 27 days of water and land activities, with the popular giant Slip ‘n’ Dip inflatable obstacle course you can see set up on the water down at Sturt Reserve,” Mr Sedgman added.

“Murray Bridge is changing and with the eyes of the world upon us this month, we’re excited to show off some of our greatest assets.”

“If you’re looking for a reason to visit, come down to Murray Bridge next Friday afternoon to watch the community ride and men’s stage four finish along Bridge Street. The atmosphere will be electric, and once the race is complete, people can head down to our riverside beach bar (part of the Murray River Splash Festival) for entertainment and fun until late,” said Mr Sedgman.

“There’s plenty of good reasons to stay the night, so we’d encourage visitors and support crew to book some accommodation and explore what we have to offer for the rest of the long weekend.”

MEDIA RESOURCES: Media items are provided by the Rural City of Murray Bridge and Murray River, Lakes and Coorong Tourism Alliance – media are welcome to use them without credits.

Social-isolation with a view (and no flights)? It’s the perfect time to escape to our Murray River
One mouth to feed and another to explore